woodchopping at the show 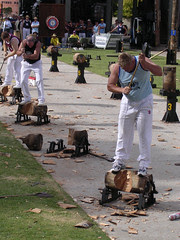 Always among the best events at the Show.

We missed the women's events which were scheduled for last Monday but saw a world championship single handed-saw event, won by Australian sawer, David Foster, for the 15th time. No pic as he was way too far away from where we were sitting. Nice bloke, however. After his award he came over to where we were as his family were right behind us. He's not David Foster, the Australian novelist, just in case you were wondering.