Showing posts from January, 2010
Show All

Lars Palm has got busy publishing again through his ungovernable press . He's just published three works in pdf format (free, downloadable), including my own Passages: Annotations . This e-chapbook is an extract from something I hope one day might see the light of day in hard copy, and is a collection of writing from this blog and a number of other projects that I was engaged with over the last ten years. It is a poetry and poetics assembly. The cover photo is by Annette Willis . Lars has set up a good reads page so, once you've had a read, you can leave a comment there or here on the blog, if you like. The other two new ungovernable press publications are Amanda Laughtland's Take It and Felino A. Soriano's Intersecting Views of the Possible Interaction . You should check them out as well. And all the other great downloads there. Ungovernable press now has a facebook page , if you want to join up. I'm honoured to be part of ungovernable, and well pleased to
Post a Comment
Read more

out of the box in melbourne 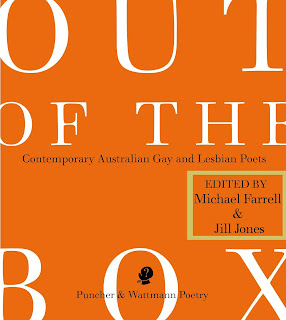 Announcing the February Melbourne launch of the ground-breaking anthology, Out of the Box: Contemporary Australian Gay and Lesbian Poets , edited by Michael Farrell and Jill Jones ( Puncher and Wattmann ). To be launched by Christos Tsiolkas and Kathleen Fallon Tuesday 2nd Feb, 7pm Hares & Hyenas 63 Johnston St, Fitzroy Readers at the launch include: Javant Biarujia, Bel Schenk, Maria Zajkowski, Terry Jaensch, Peter Rose, Michael Farrell, Jill Jones and, we hope, Susan Hawthorne. The event is part of Midsumma , Melbourne's annual gay and lesbian festival. Other poets in the anthology include David Malouf, Dorothy Porter, Pam Brown, Chris Edwards, Lee Cataldi, Martin Harrison, joanne burns, Scott-Patrick Mitchell, Tricia Dearborn, Kate Lilley, and many others. Out of the Box is the first contemporary Australian gay and lesbian poetry anthology. These are poems of the 21st century: sexy, sassy, innovative, and real. Read an interview about the anthology with Michael a
3 comments
Read more

do ebook readers do poetry any favours?

January 21, 2010
I've had an ongoing interest in all the discussion around e-book readers for some years now. For obvious reasons. And I'm not sure all the current flurry about the new Apple tablet and the like will be a big advance. In other words, I've never been convinced by the slight clunkiness of e-book readers and still am not (quite), though I relented late last year and bought one. No, not a Kindle. I didn't like the idea of that enforced connectivity nor do I have endless cash to pay for it. I bought a decent little device, the Ecoreader , that works offline with all the main formats, including pdf and text files. Mainly, I wanted something that I could use to read poetry books and manuscripts, my own for checking, and works by others. Also for the endless document files I have hanging about. Something lighter and more compact than a computer, that used epaper, that in fact saved endless printing but might also offer some pleasures of reading in a different way. But what
Post a Comment
Read more

they haven't got this one licked

January 21, 2010
As they say, postage stamps aren't what they used to be. I prefer birds on mine, but good old Aussie Post has now taken to sticking (so to speak) 'literary types' on our stamps. And here they are: Peter Carey, Tom Keneally, David Malouf, Bryce Courtenay, Tim Winton, oh and Colleen McCollough. This article in the SMH notes, wrongly, what is wrong with this picture. It reported one of the authors saying there were no poets. David Malouf is a poet, for all that he has also written prose. But what is wrong is kind of obvious when you do look. Five blokes, one woman - only. No Indigenous writers. Ah, the 21st century and time still stands still! Another poet woulda been nice, as well.
Post a Comment
Read more