Showing posts from February, 2007
Show All

February 28, 2007
OK, again no top tens from me, but Mark Young has tagged me for a list of poetry books that have influenced me. I really have to divide it into phases, but I will only do two phases, however. First, the books I read, indeed, bought, when I was a teenager when I thought that I could write poetry. These are still books I have, and most of them are anthologies or selecteds. This is due pretty much to the limited literary landscape of a suburban kid during the Australian dark ages. I still consult the Montale. The Poets World (Aust edition), ed by James Reeves - was actually a school text. The copy I have before me as I type is Annette's. The Penguin Book of Japanese Verse, ed Bownas and Thwaite The Penguin Book of Contemporary Verse, ed Allott Voices - the third book, edited by Geoffrey Summerfield Collected Poems, T.S. Eliot Selected Poems, Montale (Penguin Modern European Poets) Then, there's a second round of books which influenced me from a later period when I got ser
Post a Comment
Read more

February 25, 2007
The owl has moved on, by the way. We wish it well and hope it's not been separated from its group too soon in its life. But what do I know about the southern boobook. I hope that Annette's pix of it will turn out better than my own. A southerly came through today with a welcome change and a bit of rain, even a touch of thunder. But also, the change may have caused some nasties to grab a hold of my throat and sinuses. I shall now crawl off to bed and hope for the best. But I feel a cold or worse coming on. Boring.
Post a Comment
Read more

February 25, 2007
I have also been tagged by Richard Lopez to do a top ten film list. Again, I just can't do the 'ten' thing . But what I thought I'd do is list some further movies that, for me, come from a certain era and had an effect on me, sometimes because of who I was with when I saw them as much as the movie itself. Occasions are important. And because I'm doing this in response to Richard's tag, he of "really bad movies", I've tried to keep more or less to popular(ish) and, mostly, English language films that, at some time or another (not necessarily at their first release by any means), I saw on screen, not in my lounge room. O Lucky Man Don't Look Back Romeo and Juliet My Fair Lady The Swiss Family Robinson Whistle Down the Wind Dr Strangelove Barbarella A Hard Days Night The Endless Summer A Man and a Woman The Prime of Miss Jean Brodie Fantastic Voyage The Russians Are Coming, The Russians Are Coming Five Easy Pieces The Passenger Close Encounters
Post a Comment
Read more

February 24, 2007
It's something quite uncommon amongst the wings of our small sun. We adjust our measures to what’s found strain to see, wings are white and dun. Green gaze sizes up an omen a regard that’s direct, precise, profound. My eyes are all tears and flaw my head bears its tipsy vertigo roll cursing the limits of my prospect where vision construes a fully other soul appreciates the danger claw that it’s not feather green up there. Though sunshine makes the scene turn gay I feel the mark, of being prey.
2 comments
Read more

February 24, 2007
Meritage Press announces the recipient of "The Filamore Tabios, Sr. Memorial Poetry Prize" - and the winner is Jean Vengua for her manuscript, Prau . Many cheers and congrats.
1 comment
Read more 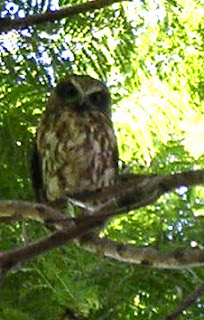 A wonderful discovery this morning. Annette called me out into the garden, saying 'get your glasses on, there's an owl in the backyard'. Quiet as we could, despite morning traffic, landing jets, neighbourhood noise, despite the fact that other birds were squawking at it and around it, we edged out under one of the jacaranda trees. And looking up, there it was. An owl! There's something about being steadily regarded by an owl, almost as though the other is looking right through you, slightly chilling. An anthropomorphism, I know, but that was the feeling. We fluffed around with binoculars, my ditzy digi camera, the field guides to Australian birds (we have two). So far as we can determine, it's a southern boobook, probably a young one in what they call the pale phase. It looked big to us but it's probably within the 30 cm measure, which isn't a small bird. It also appeared tired. It yawned, if birds yawn, and looked as though it was trying to rest. I then rec
4 comments
Read more

February 23, 2007
I've been tagged by Ivy to list my favourite 10 movies. I can't do 'favourite' (I'm too flighty) and I don't do 'top 10' anything. But I just sat down for five and came up with a list of movies I would watch again and, indeed, some of these I have watched again recently. Nothing out of the bag here, pretty predictable, but maybe that's what you'd expect. There's plenty more where these came from, especially a lot of films I saw in the 1970s which seem to have been forgotten (anyone recall Private Vices Public Virtues, or Abundance - err, I meant Providence - remember when Alan Bates was in every movie going?) Céline et Julie vont en bateau The Conversation LOTR 123 (esp 2) Rear Window House of Flying Daggers Hiroshima Mon Amour North By Northwest In the Heat of the Night Smiles of a Summer's Night Scenes From a Marriage Les Enfants du Paradis The Big Lebowski Fargo The Maltese Falcon Aliens Star Wars - The Empire Strikes Back Polterge
2 comments
Read more

the company to poetry 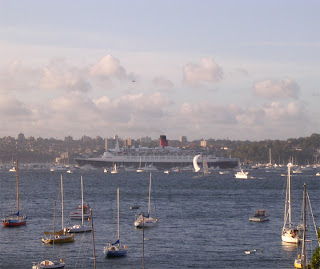 We were slightly upstaged at the poetry reading last night, mainly by the two big queens in the harbour (but it is Mardi Gras month, let's be reminded), but also by a gaggle of kookaburras, cockatoos and currawongs. As well as that, we had musician Michael Atherton on various instruments including the crackle box, the double flute, the waterphone and the kythera. And Sydney roads turned into a carpark as everyone was out till very late gawking at the boats. Still, some came and listened to poetry.
2 comments
Read more

February 20, 2007
... and don't forget, Sydney bods, Poets Pickernick this evening, down by the harbour: 6pm—8pm, Blackburn Gardens, 548 New South Head Road, Double Bay. On the 324 bus and away to Double Bay Double Pay with your picnic rug and portable food. Simon Marnie is hosting the Woollahra Philharmonic Orchestra and readers Michael Atherton, Peter Coleman, Stephen Edgar, Kate Fagan, Jamie Grant, Catherine Jinks, Jill Jones, Adrian Robinson, and students from Cranbrook, Moriah, Scot's and Rose Bay Secondary College. I'm trying to decide what to put in the picnic hamper (ie, my eco-friendly calico bag). I think a quick trip to the supermarket at Edgecliff will yield last minute supplies. And while we listen to poems, maybe we'll get a squizz at the QE2 and Queen Mary 2 , which both sail into the harbour today.
Post a Comment
Read more

February 20, 2007
The ars poetica project has been going for a little while, and promises to build up over at least a year. It features what lots of people tell you never to do: poems about poetry. All the more reason to do it, of course. Poems appeared last week by: Mary Maher, Vernon Frazer, and Sandra Alland. Poems will appear this week by: Sandra Alland, Maxianne Berger, and Jesse Glass. I am hoping that some Australian names will feature further down the track as the project spreads out.
2 comments
Read more 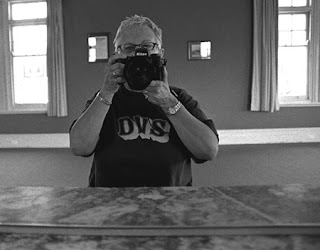 February 11, 2007
You might be interested in seeing a portfolio of Annette's photographs (and more here ) featured on the London Photographic Association website. She has chosen a mixture of black and white and colour shots and at least two of them were taken in our local Marrickville area. There may be further additions but this is already a wide selection of her work.
2 comments
Read more

poets on a summer's night

February 04, 2007
OK, there's been a brief hiatus here. I had things on my mind and things to do - family stuff, all in train but taking up time 'n energy. And just the last few days bouncing around two conferences. I spoke at one and read at another. And took lots of notes. And, more importantly, caught up with friends and colleagues, many of whom I see rarely. But it gets me thinking a coupla of things. -- That it's mainly at an, for want of a better word, 'academic' conference that there's any discussion of Australian poetry - though there have been some practitioner conferences in the last few years that have been very honorable exceptions. The mainstream media and events seem only to be able to deal with discussion about the usual suspects (poems and poets), if they approach poetry at all. -- That poetry by many of us is still resistant to discussion, let alone analysis - or is certainly effaced from any debate or discussion because ... because why? ... it doesn't f
Post a Comment
Read more
More posts