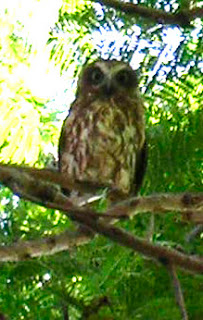 A wonderful discovery this morning. Annette called me out into the garden, saying 'get your glasses on, there's an owl in the backyard'. Quiet as we could, despite morning traffic, landing jets, neighbourhood noise, despite the fact that other birds were squawking at it and around it, we edged out under one of the jacaranda trees. And looking up, there it was. An owl! There's something about being steadily regarded by an owl, almost as though the other is looking right through you, slightly chilling. An anthropomorphism, I know, but that was the feeling.

We fluffed around with binoculars, my ditzy digi camera, the field guides to Australian birds (we have two). So far as we can determine, it's a southern boobook, probably a young one in what they call the pale phase. It looked big to us but it's probably within the 30 cm measure, which isn't a small bird. It also appeared tired. It yawned, if birds yawn, and looked as though it was trying to rest.

I then recalled having heard some kind of bird commotion last night in the general direction of where this bird is sitting. Our neighbour confirmed this. So maybe that's when it arrived.

My pics aren't the best as the owl was very high up (and I, then Annette, very quickly photoshopped) but they're all we got until Annette gets hers developed (she's still an analog gal).
backyard birds

Meredith Jones said…
Oh how amazing, and absolutely wonderful. An owl in Marrickville! I'm linking to this immediately.
24/02/2007, 15:11