Showing posts from December, 2010
Show All

December 19, 2010
it is the centre of a word that is unimaginable, almost as it flutters out with the birds indifferent over the lake (from ‘Winged’ in Broken/Open )
Post a Comment
Read more

December 19, 2010
Poems are composed in doubt. The making is not just about choices but about fear, anxiety, resistance, about what is not done as much as about what is done or made.
Post a Comment
Read more

December 15, 2010
data trickles through rain ice tracks dust on my side of thought but which side I don't know how to juxtapose devil syllables gagged I think of a reply phrased like a jigsaw piece this is blessing numbered for night disguised in simple time the air and me acting loose now tossing aside cold rain feeling levels, unmerged dreaming pleasures half-silent halt teeth chatter syllables body the road awash place me within the skim acres of grassy somnolence far away mist pink skin gets slippery when we could be at one
Post a Comment
Read more

change in the leaves this afternoon

December 14, 2010
"Among all the subjects first marked out for lyrical expression by Baudelaire, one can be out at the forefront: bad weather." Walter Benjamin , The Arcades Project , trans Howard Eiland and Kevin McLaughlin, The Belknap Press, 2002
Post a Comment
Read more

December 12, 2010
outside the lion is on high fish tremble in trees mud eels loop around a fallen moon and if there is no agreement amongst us the future may plant its dream instead of jungle leaves stones and wings or alternatives simple murder harvest gutted song a million thoughts of foam a million ways to travel beyond things to outrun rain lava or the moon to fear fish and gutted mud bacteria monsters and fleas melodies circles shadows leaves
Post a Comment
Read more

December 11, 2010
less wizened afternoon with smoky pain rain drains away swirls of branches tentacle blue elusive guardian nothing I would ask always pre-empted juice fades halo on the skin nothing so relaxed as alive hint of your breath as it comes as sin ordinary holy everywhere prayer incubates air from the tunnel slipping doors at the harbour let me swallow my sentence
Post a Comment
Read more

December 10, 2010
A small book of sonnets by Australian poets, called Some Sonnets , edited by Tim Wright and made by him and friends, has just been reviewed by Richard Lopez . Richard says: "A few of these sonnets are in traditional form while the majority are experiments, like the nine-line poem quoted above, of the kind began by Ted Berrigan and even, might I suggest, John Berryman and with more than a dash of Gertrude Stein and a pinch Jackson Mac Low. I loved the lot of them." The poets include Kate Fagan, Marc Jones, Patrick Jones, Sam Langer, Caroline Williamson, Nick Whittock, Joel Scott, Peter Minter, Michael Farrell, Derek Motion, Tim Wright, Jal Nicholl, Ella O’Keefe, Tom Lee, Brett Dionysius, Jessica L. Wilkinson, Peter O’Mara , Stu Hatton, Astrid Lorange, Stuart Cooke, Claire Gaskin, Ryan Scott, Cory Wakeling, Duncan Hose, Ted Nielsen and Jill Jones. It makes for a lot of Jonesies in one book. But that's cool, well, it has to be, and the book is cool. Pam Brown also has
Post a Comment
Read more

December 09, 2010
I seem to have written a small book of poems in the last few weeks - maybe - there's a touch over 40 pages worth. All done in the thin cracks of a very busy time - I made myself do it. But the problem is, none of the poems have titles. One almost did but the title came down into the poem. Now, I've always been someone who'd said that titles are important, as important as the poem in one sense (well, they are part of the poem, part of the visual as well as the textual). I'm usually quite good at them. So, what has gone wrong? Am I just being titularly lazy? What to do? Overturn years of well-established practice? I feel a wee crise washing across me. I've read a lot of poems without titles, sure, we all have, but leaving these ones as they are doesn't seem quite right (and I wonder why I think that). Neither does numbering them nor calling them all 'poem', or suchlike. Nor could they become one long poem - that is not right either, in this instan
2 comments
Read more

December 09, 2010
it’s a choice not like damnation that old poem requiring a sunhat whereas handles take concentration especially in the storm of news from flat boxes two ducks heading north they’d be looking for water but loads engage my shoulders here below water - why didn’t I think of that why don’t I pull the cord and leave
Post a Comment
Read more 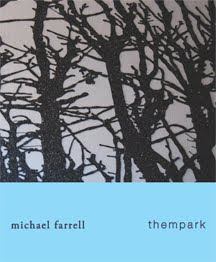 Michael Farrell has a new book out, thempark , from Book Thug in Canada. Great cover and poetry that uses the poetry of John Ashbery as a kind of template. "... – Oprah to your left, Gitmo down that aisle, and over there, marzipan. “It’s an ipod world.” As his title implies, Farrell is caught between a themepark designed by Ashbery and a 'thempark' where the others live" says Michael Davidson.
Post a Comment
Read more

December 06, 2010
are taken away on fences wilder with sounds saved but not less free
Post a Comment
Read more

December 05, 2010
While it seems crazy in the spider season not possessed not forsaken perhaps it starts with the ravens To a dream of your old clothes these afternoons that do not, that bring you pain perhaps the boxes will fall only for you Knots in night, trinkets leaning get along, little dreams, get along if it wasn't for the rumours You could be anywhere pushing or lugging and leave, I can't show you exactly into the rain, I haven't had that dream Again, bodies the least of my preparations I ate the song positions as I go a slow coast doesn't differentiate With a stolen leather jacket the air is noisy on the stones light is not always its light The forecast has showered me and will be thankful to walk is to remain confused but now is enough The factories of the road continue feeling foolish to be free left out in the rain and no longer white The house is full of waterfalls falling like this forever back east they've got thunder Is living day
Post a Comment
Read more

and then we go

December 04, 2010
I aim at Friday with its clunky beat. You can exchange in an email ‘yeah, we know that’. What is the simpler solution friends or thought It remains a rhythm without remembering or forgetting Holding fast against all attempts you rise, you part
Post a Comment
Read more

December 02, 2010
Finally, the trans-Tasman digital bridge has been finished. Brought to you by the New Zealand Electronic Poetry Centre ( nzepc ), it is the culmination of two symposia, a call-out for work and a lot of organising behind the scenes. The Digital Bridge organisers, Pam Brown, Martin Edmond, Brian Flaherty and Michele Leggott, invited contributions to build a digital bridge between Auckland and Sydney as poetry symposia took place in each city in March and September 2010. Yours truly was there at both symposia. In June 2010 the first part of the bridge was launched which included more than 50 creative works, as well as a collaborative digital poem, audio from the Auckland Uni sessions and pix. The Auckland side of the bridge has now been joined to the Sydney side which contributes around 60 creative works, as well as another digital collaboration, as well as more audio talks, video readings, photos, and texts of papers and commentary. The organisers say: "We present here the
Post a Comment
Read more

December 01, 2010
I don't know the names the thing waits all the same I remember ZigZag and sublime's shaky hands out of the cubes without cubes water hands you a penny ruins which a southerly swells the day has its hat the dead can't wear within this hour you're fed up decomposing on the ground calms have rhythms fine hairs in the open
Post a Comment
Read more
More posts