January 06, 2006
While touring around the South Island of New Zealand just before Christmas, we arrived at the coastal town of Oamaru and stayed the night.

New Zealand novelist and poet, Janet Frame, lived for many years in Oamaru as a child and teenager, and a Trust has now purchased one of the houses the Frame family lived in - at 56 Eden Street. It is open for public viewing, which is precisely what we, as ‘public’, did. The house is not being restored as such but rather, being ‘reframed’ (apparently Janet Frame’s words). So it has the look and feel of how it must have been during the 1930s and 40s. I was given the privilege of sitting at Frame’s old desk, looking out of the back window, and a typewriter (remember those?) on which I composed an on-the-spot response to the place and our visit. I won’t publish that here but it was a sobering experience using such a device again after all these many years. I rather liked it, the effort of it.

Here are a couple of shots, one of the bedroom the Frame girls slept in and one looking from Janet's writing desk out into the backyard and up the hill where she played: 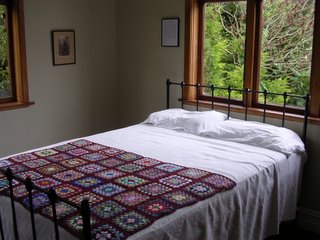 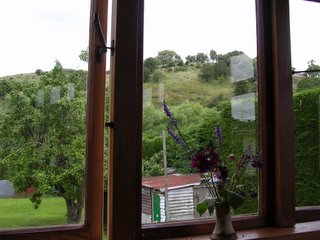 Apart from Framiana, Oamaru is worth a visit as it has many historical buildings made of the most lovely white stone and a number of artists and artisans now live there. [And if you’re into penguins, you can view blue penguins (we call them fairy penguins in Australia, or ‘Aussie’ as the Kiwis say) or yellow-eyed penguins at Oamaru as well as at a number of other spots along the coast. The blue penguins are ‘big business’ in Oamaru and it costs to visit the penguin colony’s viewing amphitheatre, on which tour companies have some kind of stranglehold. We went to the free (very windy) yellow penguin hide and saw three little guys come ashore in the evening. They’re the rarest penguin in the world, apparently. They’re bigger than fairy penguins and pretty plucky. We saw another from a hide at Sandfly Bay (on the Otago Peninsula) running the gauntlet of time, tide, sea lions and fur seals and make a way up a very steep cliff. It took ages, seemed to be a lot of thought and dithering at least to our human eyes, but it made it.]

Anyway, back to Janet Frame. After leaving Oamaru the next day we drove further down the coast, and deliberately sought out the old mental hospital at Seacliff, just north of Dunedin. Janet Frame entered Seacliff as a voluntary patient in 1947. She was mistakenly diagnosed as schizophrenic, and remained in mental hospitals for eight years and was subjected to over 200 electric shock treatments. Seacliff is now, apparently, a backpackers called The Asylum (pretty tasteful, eh).

We could not gain entry to the site – ‘no sightseers’ it said on the closed gate - but saw parts of the old buildings and grounds from the road. I was happy not to go any closer, it seemed a very dark place.

Here are some shots I took from the road: 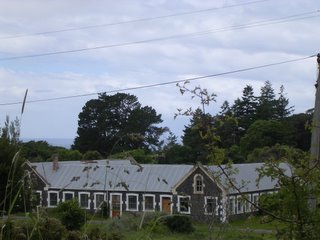 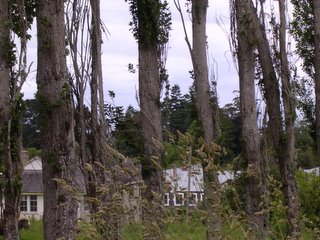 By chance, some days later we met a man who had been a psych nurse during the years Frame had been incarcerated. He told us of plenty of darkness and cover-ups of the ultimate kind.

After getting out of Seacliff, having escaped having to undergo a leucotomy at the last minute, Janet Frame wrote:

“From my first moment there I knew that I could not turn back to my usual life or forget what I saw at Seacliff. ... I saw people with the eyes of hurricanes surrounded here by whirling unseen and unheard commotion contrasting strangely with the stillness.” (from An Angel at My Table)

She also wrote in an earlier article in the New Zealand literary journal, Landfall (March 1965): “When I was discharged I knew (though I was repeatedly urged to 'adapt' 'mix' conform') that unless I devoted my time wholly to making designs from my dreams…I should spend the remainder of my life in hospital - or perhaps, as had been planned for me while was a patient, there would be a leucotomy and the dreams of those who cared for me would be realized: I would 'mix' 'conform', become a 'useful member of the community'.”

I was also given a book of poems by the New Zealand poet, Peter Olds, - It Was a Tuesday Morning: Selected Poems 1972-2001 - which has a number of poems relating to Seacliff, the place and the institution. I’m glad to have made an acquaintance with the work. He writes of ‘A dark night/ the kind only Seacliff can give’ ('A Visit to Clifton House').

I was already toting a copy of Frame’s The Pocket Mirror, from which I read aloud to Annette on Christmas day in Dunedin. This is one of the poems I read out.

Here I’ve gone down with the sun
written syllables till time has surprised me
with the fact of his consistency.
I love not you but the sun’s going down
so easily.

The tramlines are torn from their sockets.
Things do not suffer as we supposed.
People suffer more than we supposed.
The buses tread softly, jerk to a stop, the doors slide open.
I climb in, traveling to where
Down a long street lined with flowering cherry trees I walked
nineteen years ago
to stare at the waves on St Clair beach.

- Janet Frame, from The Pocket Mirror.

Here is a poem by Frame about another of her desks, the famous Landfall desk.

Information about the the Janet Frame Eden Street Trust. The pics of the house shown are obviously older. The house is now surrounded with a lovely front garden.


Some days after seeing the Seacliff site I wrote this:

What would you see
a backpackers called The Asylum

Martin Edmond said…
Welcome back, Jill. I made that pilgrimage to Eden Street way back in the 1980s, when a friend and I were researching a film in Central Otago .. the house looked as it does in the top Book Council photo then, utterly ordinary. On a later visit to Oamaru I found fragments of a pink feather boa in a drain which (the feathers) I've always assocaited with JF.
07/01/2006, 16:29