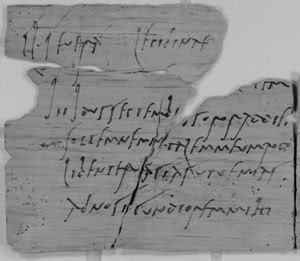 I am interested in forms of writing and so have been intrigued by the wooden tablets which were discovered at Vindolanda, an old Roman fort in northern England.

The tablets are of postcard size and charcoal was used to write on them. To me this is beautiful and moving, that such day-to-day correspondence still survives. That such a simple technology still survives. The charcoal inscriptions are still able to be read, partly aided by infra-red photography and digital imaging.

The script is known as Old Roman Cursive which slants to the right but is mainly formed of capitals rather than lower case letters. There are few word breaks and no punctuation.

Here is a letter from Claudia Severa to Sulpicia Lepidina asking Lepidina to visit for Severa's birthday and sending greetings from husband to husband. It may be the earliest known example of writing in Latin by a woman. This would be AD 97-105.

The Vindolanda Tablets Online site is part of a larger project, Script, Image and the Culture of Writing in the Ancient World.

I wonder how long the capacity for handwriting will survive.

genevieve said…
How long the capacity for handwriting will survive? now that is a sobering thought. Mine is getting scrappier every day.
That is quite marvellous, however, that charcoal on paper has survived so long.
26/06/2007, 20:57