my tour down under 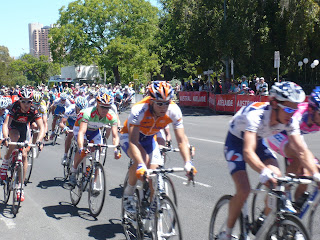 OK, I don't ride a bike. Tried. Failed. But I do like to watch the Tour de France on the telly each year, and not just for the scenery. And, because I'm currently living in Adelaide why wouldn't I go and watch the last stage of the recently completed Tour Down Under last weekend, which was 18 circuits of North Adelaide's parklands?

What I was not prepared for, as I stood on the side of the road with no barrier between me and the cyclists, was the extremity of the pull of the peleton as it passed. It was almost as if I would be sucked into the ongoing stream of energy produced by the swooping mass of men and wheels. 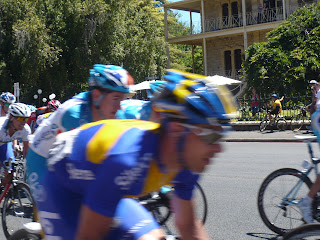 I only had my happy-snappy with me so, as you can see, my photographs are crap. In the one below you can see Lance Armstrong - I only know this as he always wears black socks and he was wearing a black and yellow helmet. I met a woman who was standing next me as the race whooshed past who had met Armstrong at the Women and Childrens Hospital which he was visiting due to his advocacy for cancer patients and treatments. She was impressed by him. 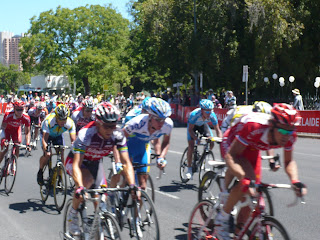